No, you’re not a fraud: Tips for overcoming impostor syndrome

No, you’re not a fraud: Tips for overcoming impostor…

[I resolved to write about this a few weeks ago, and since then, three articles have popped up in my LinkedIn and Facebook feeds on precisely the same thing. Clearly it’s an issue that is occupying the thoughts of other people too. I did wonder whether I should still write this given that there already seemed to be so much out there on the topic. But then I decided I had something of my own to contribute, so here goes!]

It’s about impostor syndrome. You know, when you don’t think you’re good enough to be where you are, like your success is entirely attributable to external factors and people are just being nice when they say positive things about you and your work. When you think you’re a fraud and you’re just about to be found out. You’re particularly vulnerable to it when you start a new job or take on new work responsibilities. 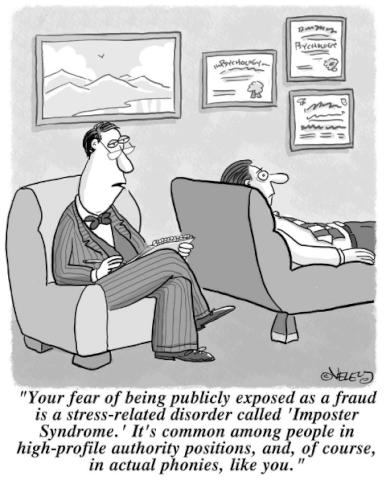 The first observation I’ll make is that you’re in good company. Apparently some 70% of the population suffer from impostor syndrome at some point. Better than that, you’re in the company of lots of very talented high achievers who are all frauds in their own heads (a quick Google tells me that Sheryl Sandberg, Leonard Cohen, Maya Angelou and Neil Gaiman were – or indeed are – no strangers to this). So it’s not just you. It’s me, and them, and more likely than not the role models you look up to.

Knowing other people feel the same way too can help with perspective, but of course you’ve still got the problem. So here are a few tips, thoughts and questions to ask yourself to help you overcome impostor syndrome.

So there you have it; my tips for overcoming impostor syndrome. I’d love to hear your thoughts! Do get in touch if this has resonated with you, or if I can help in any other way.