Power struggles: the illusion of control

Power struggles: the illusion of control

I’ve been thinking about manipulation, which as it turns out children are remarkably good at. A couple of weeks ago we’d had an exhausting day (involving an all-day visit to Universal Studios in Singapore, including literally running through downpours), and I had no energy or patience left when one of the kids was reading in his high bunk well past bedtime, having ignored my clear instruction to go to sleep. I asked that he stop – “two more pages!” came the cry, which I agreed to before going to brush my teeth.

When I returned he was still reading, so I told him in no uncertain terms to hand me the book. He groaned and eventually extended it, but when I held out my hand, he deliberately withdrew it just out of my reach. And smiled.

I suspect you won’t be surprised that I rather saw red, although I regretted it as soon as I’d left the room, and promptly spent some time thinking about how easily he’d made me lose my temper.

In cognitive behavioural coaching, we explain that it’s not events that cause our emotions, but how we interpret those events – in other words, how we think about or what meaning we give to the events*. He hadn’t made me angry; I was angry because his behaviour had triggered something in me that demanded control of the situation, and compliance from him. What kinds of things had been going through my mind? Perhaps You’ll do as I say. Children should listen to their parents. How dare you cheek me in that way. I think there was, too, spillover from some work frustrations that I’ve been experiencing lately, most notably a feeling of being ineffectual and not being able to enact necessary change.

The link between thoughts, emotions and behaviours is the cognitive triangle, and it can lead to a pretty vicious cycle. If my thoughts are anger-inducing, and lead me to fury, then I’m very likely to do something that, if unchallenged, will reinforce those thoughts and emotions. 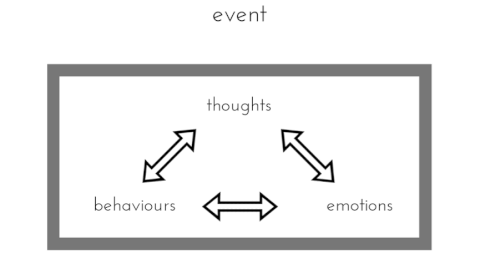 We can look at this triangle alongside another way of conceptualising the thoughts we think: the cognitive pyramid. In a situation of stress, the negative thoughts that may surface automatically are underpinned by other, deeper thoughts that we may not hold quite as consciously. These comprise our mental rules, assumptions and attitudes, and our underlying core beliefs about ourselves, others and the world, which are often formed as part of our cognitive ‘blueprint’ early in life. When we’re stressed and tired, negative core beliefs can be activated – and they can present themselves, in that moment, as absolute truths. 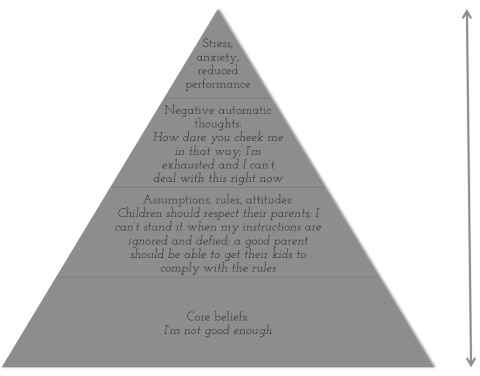 The learning that we can take from this extends well beyond parenting; it’s a valuable lesson in all relationships, including the ones we cultivate at work. It’s also highly relevant in how we can choose to respond to situations.

We’ve all had that ‘difficult’ (choose your preferred adjective) colleague, boss or senior manager, where encounters have become something to endure. How much of them can you change? You might have various degrees of agency in the form of power, influence, negotiation or persuasion, all of which certainly help in getting people to behave in the ways you’d like them to, but fundamentally the answer to that question is, not a lot. If you lead in any capacity, do you lead by force and exertion of control (how’s that going in terms of getting the best out of your people)? Or have you learnt to take a step back and empower those who report to you by giving them the space and resource to fulfil their commitment and potential?

And as for situations? Well, let’s take an example beloved of British rail travellers everywhere – delays and replacement rail services. You’re late for your appointment, and it’s out of your control. Or maybe you’d like to put yourself into the shoes of a man I encountered over the weekend at my local gym, whose frustration had got the better of him over lack of parking and who was now swearing loudly at the staff about being a paying customer.

How would you like to respond, knowing that you can choose at any point to change your experience of this moment? As we become aware of our default reactions to situations of stress, we also have the ability to discard them in favour of new ways of responding when we find ourselves at the edge. Real change comes when we control the only things we have true control over – our own behaviours.

*I last wrote about CBC in July last year – how time flies! If you’re interested you can check out that article here: https://quietspacecoaching.co.uk/2018/07/16/taking-psychological-responsibility/